Pesticides represent the leading cause of batch failures in the cannabis industry.  They are also the hardest tests to run in the laboratory, even one equipped with state of the art equipment.  The best instruments on the market are HPLC and GC dual mass spectrometer detectors, called “HPLC-qqq”, “GC-qqq,” or just triple quads. 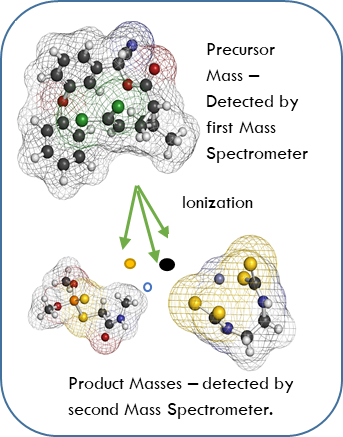 As non-lab people, we envision a laboratory that can take a cannabis sample, inject it into a triple quad, and have the machine quickly and effortlessly print out a report of pesticide values. Unfortunately, this is far from reality.  The process is much more hands on and complex.  In the current chemistry lab, trained analysts have to first program the triple quads to look for the pesticides of concern; in cannabis pesticide testing, this is done by first programming the first of two mass spectrometers to identify a single (precursor) mass that is characteristic of the pesticide in question. For BCC requirements, this has to be done for all 66 pesticides, one at a time.

Next, these precursor ions are degraded into secondary chemicals called the “product” ions; also called transition ions. The second of the two mass spectrometers is used to analyze these transition ions. This process is graphed and the resulting spectrum is analyzed by trained chemists in the lab, pesticide by pesticide, for all the samples processed that day. If the lab analyzes 10 samples, that translates to 660 spectra to analyze (66 pesticides x 10 samples).  When looking at the spectra for each pesticide, the analysts must compare the ratios of the precursor ions to the product ions.

METHODOLOGY: In this fledgling industry, there are few published cannabis pesticide methods. The identification of the precursor mass and product ions are not always published, leaving labs to research which ions should be used.  This adds to the potential for differences between lab results.  Once selected, labs should validate their research, through a series of experiments to ensure the correct precursor and transition (product) ions are being used in the method.  The best instruments on the market for this testing are HPLC-MSMS and QC-MSMS, also called “triplequads”. Both instruments are needed in order to analyze the full list of pesticides required in most states.

SAMPLE PREPARATION: Beyond the time-consuming work that is required to develop sound pesticide methods, the extraction step is absolutely critical for credible results. If the pesticides aren’t fully extracted from the cannabis product, then the results will be lower than expected.  Sample preparations are often not standardized between labs, so unless a given extraction technique is validated for accuracy, there is the possibility for differences between labs.