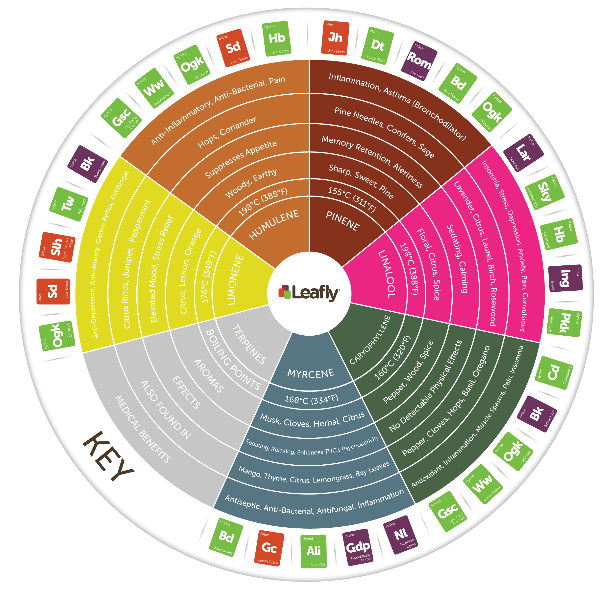 Terpenes, (prenounce TUR-peen) are a diverse group of organic Hydrocarbons (C5H8), produced by a wide variety of plants that are most notable for their smell.  They are synthesized in cannabis in secretory cells inside glandular trichomes, the same glands where THC is produced, and production is increased with light exposure. These terpenes are mostly found in high concentrations in unfertilized female cannabis flowers prior to senescence (the condition or process of deterioration with age). Many terpenes vaporize around the same temperature as THC (which boils at about 157°C), but some terpenes are more volatile than others. The term “Terpenoids” are terpenes which have been chemically modified.
There are over 120 different terpenes that can be manufactured by Cannabis, some only in trace amounts with others in double-digit percentage. These chemicals comprise between 10 and 20 percent of the total oils produced by the glands and they make up about 10-29 percent of marijuana smoke resin. The age, maturation and time of day can affect the amount and ratios of terpenes.  They are constantly being produced but are vaporized by heat and light of the day. The same variety, even genotype, can produce a different terpene profile when grown in different soils or with different fertilizers. In addition to many circulatory and muscular effects, some terpenes interact with neurological receptors, while others seem to alter the permeability of cell membranes and allow in either more or less THC; still others affect serotonin and dopamine chemistry (neurotransmitters). Needless to say, terpenes play an important role in the medicinal and therapeutic effects of cannabis.
TESTING STRAGETIES:
Deibel Cannabis Labs currently testing for over 20 terpenes of interest to the cannabis industry.The testing for these important chemicals is mandated as part of the Dec 31, 2018 phase-in testing scheme as directed by the California Bureau of Cannabis Control (BCC).  Although the actual tests that are mandated have not been defined; nor has any guidance been given to the testing labs for the recommended methods and equipment.  Deibel Cannabis Labs utilize of Gas Chromatography instrument with a Mass-spec detector (GC-MS) for Terpene testing.  Based on BCC guidance, the allowable limits for a passing batch are within a 10% range of the label claim for the terpene in question.
Contact Us